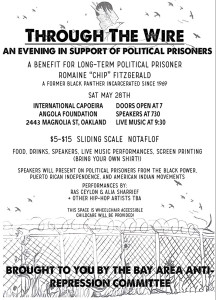 Join us on Saturday May 28th at 7pm at the International Capoeira Angola Foundation for an evening of food, speakers and music to support long term Political Prisoner, Romaine “Chip” Fitzgerald, and to build solidarity around US Political Prisoners.

Speakers include member of All of Us or None, Malcolm X Grassroots Movement
and the Political Prisoner Committee of the National Lawyers Guild.
Speakers will present on political prisoners from the Black Power, Puerto
Rican Independence and American Indian Movements and discuss why it is
important as radicals and activists to support political prisoners.

Alia Sharrief, a Muslimah in Hiphop demanding respect on the mic while combatting stereotypes through her music.
https://www.facebook.com/AliaSharrief/info/?tab=page_info

Tongo Eisen-Martin: Poet, movement worker and educator who has organized against mass incarceration and extra-judicial killing of Black people throughout the United States. His latest book of poems is titled, “someone’s dead already” was nominated for a California Book Award.

There will be food, drinks, and screenprinting (bring a t-shirt!).
This space is wheelchare accessible
Childcare will also be provided.

This event is being organized by Bay Area Anti Repression Committee