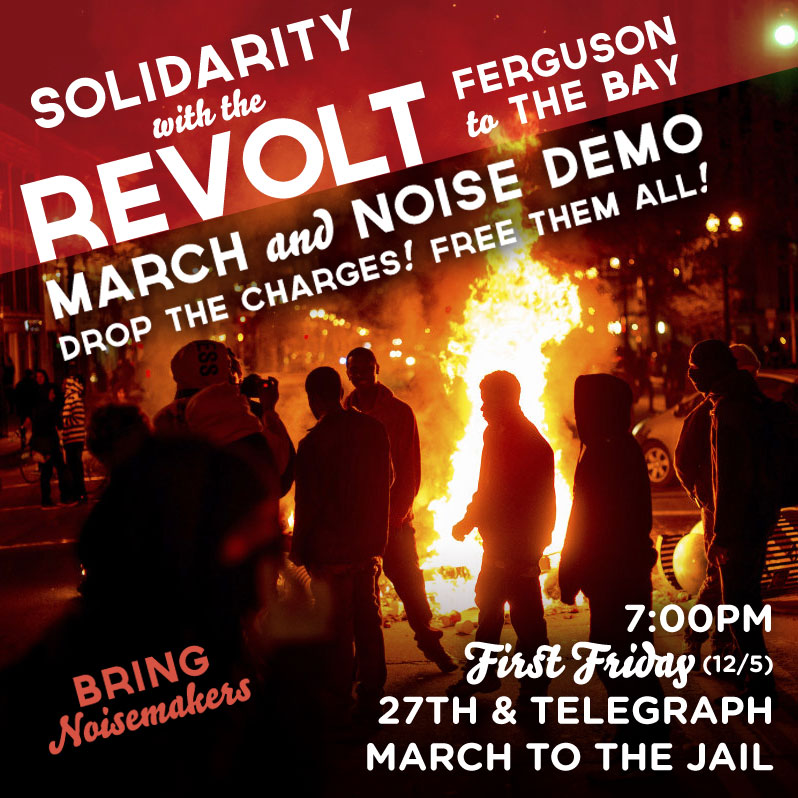 “Drop the Charges, Free Them All, Shut It Down for Mike Brown!

Over the past week, brave protesters and street fighters have taken to the streets across the country igniting a brilliant revolt against the police, white supremacy and capitalism. The people of Ferguson are an inspiration to us all and their actions have sparked an unstoppable movement that has now spread nation wide. From the mass highway takeovers to the expropriation of looted goods to the disruptions of Black Friday consumerism to the street fights with police, we stand in full solidarity with all those who have put their lives and bodies on the line to help push the struggle forward and disrupt business as usual. We reject all attempts to divide those in the streets between “good protesters” and “bad protesters”. Anyone pushing this agenda is doing the work of the state and is an enemy of the movement.

Hundreds have been arrested in this rebellion including roughly 200 here in the Bay Area. All of those who are still in jail locally are facing felony charges allegedly related to the looting of various corporate stores. Not surprisingly, all of these comrades who the state has chosen to make examples of are Black.

Join us this Friday for a march and noise demo in support of the revolt and those facing state repression for their involvement in this movement.

(This event is not being organized by ARC)