Eric McDavid has accepted the invite from East Bay Prisoner Support, Station 40 and other Bay Area anarchists’ to come celebrate struggles against repression with us! 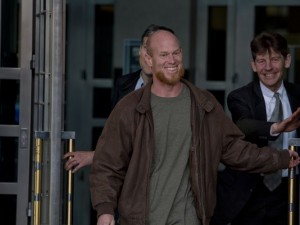 Almost a decade ago green anarchist Eric McDavid was entrapped by the FBI. Informant “Anna” convinced him and 2 others who later cooperated with the state, to engage in direct actions. He was charged with a single count of conspiracy to use fire or explosives to damage corporate and government property. Outrageous by any measure, Eric received a nearly 20 year sentence for mere conspiracy, in part based on a terrorism enhancement found only by the judge not the jury. In essence, Eric got 20 years for a thoughtcrime. Eric had spent nine years behind bars and anticipated spending the next decade caged, when on January 8, 2015 his post-conviction habeas challenge paid off.

Eric had received documents from his FOIA requests revealing that the FBI had failed to turn over key evidence to him at trial. These included romantic correspondence with “Anna” that helped show she seduced him as part of the FBI’s entrapment scheme. Despite this, it took another four and a half years before the government agreed to negotiate his release. Eric pleaded guilty to a lesser charge of general conspiracy carrying a maximum of five. Because he had already served nearly double that, he was released immediately with time served. Now Eric is piecing his life back together by going to school, learning banjo, and spending time with his partner Jenny, his tireless advocate from Sacramento Prisoner Support, and his family.

As Bay Area anarchists, we care deeply about the resistance efforts Eric was part of and the repression he experienced as a result. We welcome Eric back from prison with comradely greetings, open arms, and a dinner celebration!

On February 21st, 6pm at Station 40 we will celebrate Eric McDavid and those in resistance to state repression. Enjoy dinner and conversation with Eric McDavid, Sacramento Prisoner Support, Eric’s counsel, and others active in anti-repression struggles. Followed by dessert and live music.