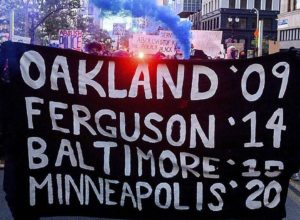 After an amazing week of rebellion across the Bay Area, we want to provide an update on the work we’ve been doing as well as on the status of the many people arrested for rising up. Here are some key points:

#1: Covid-19 and court closures have presented unprecedented barriers. All court was closed this week until today 6/5/2020, when the first protest related arraignments took place. In Alameda County, courts are not currently open to the public. Instead, court is being held online through video and phone conferencing. This could change in the near future and we will update you if physical court support becomes possible.

Due to Covid, most people arrested under misdemeanor charges in Oakland and San Francisco have been cited and released before arraignment.

#2. People arrested in Oakland with felony charges have been processed into Santa Rita and given high bail amounts. ARC, along with APTP, People’s Breakfast Oakland, and Silicon Valley DSA, has bonded out all those we have been able to make contact with, and will continue to do so.

#3. WE CAN ONLY BAIL OUT PEOPLE WE HAVE CONTACT WITH. THE BEST WAY TO GET A HOLD OF US IS THROUGH THE NLG.  If you know anyone who is still in jail, please call the NLG Public Hotline at 415-909-4NLG or have them call from inside jail at 415-285-1011 (and tell them to share the hotline number with others). After reaching out to us, the arrested person also needs a co-signer to vouch for them on all bond documents. We cannot bail people out without a co-signer so we recommend lining one up before going out to protest if possible!

#4. San Francisco has moved to a “no cash bail” system, but it’s not working well for arrestees. Unless your charges are considered to pose a threat to “public safety,” you are taken into custody but are released after arraignment without bail. However, SF jail has been processing arrestees very slowly, leaving people to sit behind bars for days before eventually releasing them after arraignment. If you are considered a threat to “public safety” you are kept in custody with no possibility of release until your court date.

#5. NEVER TALK TO THE POLICE / NEVER TALK TO THE FBI. No matter how much they pressure you, you have the right to remain silent and to ask for a lawyer. Anything you say will be used to incriminate you and others. The FBI has already questioned some arrestees in the Bay Area as well as around the country. If you are questioned by the FBI, immediately contact the NLG at 415-285-1041.